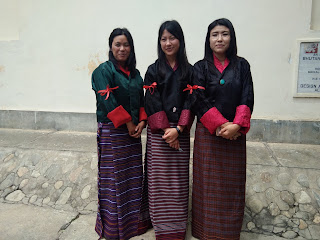 Menstruation is nothing more than a biological change in women’s body; nothing to be stereotyped, discriminated and looked down. It’s everyone’s responsibility.

My personal reasons why we tie the red ribbon on our right arm; support the right of women to be treated equally, no matter what. It also shows the right of every man to support this and pledge to be supportive irrespective of who and what you are. My perceptions may not be true to others but I would like to believe and support with my intuition and perspective. Our strong cultural, traditional and religious belief treat it otherwise. While to some extent it is agreeable, especially on the religious ground (even though doesn’t give a strong basis), it’s time we break this silence and pledge to support Menstruation hygiene.

During my high school days, even it might have been the similar experiences that whenever a woman had a period, we would make sure that she is kept at a faraway place. Nobody would agree to sit together on the…
Post a Comment
Read more 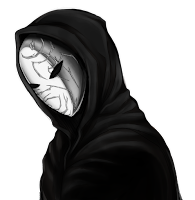 A tale of a time long gone, not even to the nearest of men's remembrance, a mother left her only daughter at home, Tshering Zangmo by the name  while she went to fetch firewood in the nearest forest. As was the usual practice for a single mother to keep her daughter away from exhaustion and weariness of climbing the mountains and vales, she left her all by herself at their makeshift home. And unexpectedly, she took quite a longer time to return home that day. And the fact was obvious that the firewood at a nearby places was not enough for her load.
As usual, she reached home, tired and fatigue with a bunch of firewood enough for another week or so. The first thing the mother did was, a motherly instinct, looked for her daughter. She wanted to make sure that she had looked after herself well, while she was away.
'Tshering, Tshering', she called out to her daughter loud. Silence prevailed at each and every corner of the place. She panicked and ran here and there, looking for he…
Post a Comment
Read more 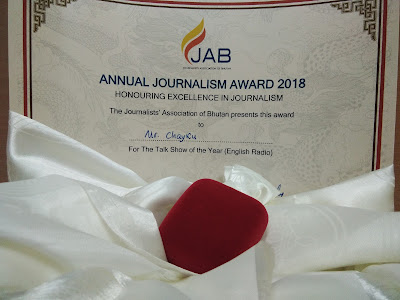 A usual evening it was, on the 3rd of May. I was attending to the needful of my little hero; an evening bath. “Chayku, you have a call,” shouted my wife from outside. I ignored it and just carried on having some fun with my son in the bathtub. Just as I finished with my boy, I checked my phone and there it was.  A surprise indeed. “Congratulations. You won an award!” the message read. It was from a colleague who went to attend the Fourth Annual Journalism Award at Namgay Heritage Conference Hall. I was speechless and said nothing. Just smiled at my boy.

‘EXCELLENCE IN JOURNALISM’ for the ‘TALK SHOW of the YEAR.’  Such an honour!  For a person like me who isn’t so familiar with awards and trophies, it was such an overwhelming moment. For every heart and soul I put in my work for the last three years, it really honoured me that somebody out there thought that my work deserves an award like this.

It’s my dream to be a journalist; explore the world telling stories and letting people know, it was …
Post a Comment
Read more

- May 02, 2018
It was in the year 2001 when I first heard the word, ‘Teacher’s Day.’ I was in fifth standard then. When the head master of the school announced that the 2nd May will be celebrated as teacher’s day, pupil went on whispering on each other’s ears, except the ones at the front of the line. They would not stir, let alone talk and whisper as they had the attention of every teacher in the assembly.

“Besides the usual celebration of the Birth Anniversary of the Third Druk Gyalpo, Jigme Dorji Wangchuck, it’s the day to pay tribute and gratitude to your teachers,” the headmaster continued. And silence prevailed everywhere.

None of us in the school had a bit of clue about what was the day all about. And nobody had any idea of what should have been done. So it passed like the headmaster had never announced during the assembly. And exactly the same thing happened the following year; just nothing, but a day off from the study.

- March 04, 2018
The year 2008, it hasn't been much of a time ever since we began the newest journey in the year; Ten year since and very glad to still feel the sense of belonging to the past good years. I don't know if this is the feeling every citizens of Bhutan gets, but I have lot more stronger attachment to the past. Time is flying so fast, without the notice of a nostrils and the clearest of the eyesight. And a lot of things have happened in those 10 years.
It's 2018, ten years after the first ever democratic election in Bhutan. Political parties are gearing up for the elections and people are trying their best to caste vote still contemplating if it will be worth it, after all.
While all goes well in the beginning after the election and victory, things begins to take turns towards the end of the Govt. tenure and the next election. A  lot of things came into the limelight in 2013, which directly or indirectly interfered the election, almost the same trend has been following this tim…
Post a Comment
Read more

The massacre, not War! 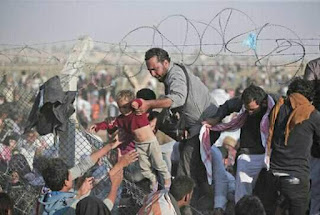 THIS IS MASSACRE, NOT WAR!
Syria, who haven't heard of this country? Excepting the little kids who are yet to learn alphabet in the kindergartens and those in the far flung remotest of places where television is still a dream, Syria still is an unheard place. Excepting this very tender group pf people, almost everyone knows Syria. And sadly the place is know from it's wide association of WAR and conflict.
Unlike in the past, of times we have known, the recent tragedy in Syria rips a heart away. The massacre, people call it, Syrians have been trapped in the barrage of war. More than 700 people have been reported killed and the innocent children, hundreds of them are being killed.
Oh, how heartless!

It looks like heaps of harvested cotton let to dry in the sun. And just a moment before they were wrapped in white, they might have been bunch of joys to the parents. And it's very hard to understand why they must pay for whatever reasons they are massacred for.
And what is…
Post a Comment
Read more

- January 28, 2018
Reality show, I am sure that the word means different genres of staged performances; like dancing, singing, acting, talents, writing, mimicry and lot others. Countries like Australia, Great Britain, US, and the closest to Bhutan, India do really showcase varieties of reality shows.
But in Bhutan, it's just singing, singing and singing. Because throughout the year it's just singing on BBS 2 and nothing else.

Initially we had Bhutan Star which was the master piece initiative of the legendary singer, actor, lyricist and a versatile man first, Ngedrup Dorji. And ever since, it has been just the singing.
Going with the exact number, we already have three singing reality show: Druk Super Star, Druk GiKalapingka, and Drinchen Phamai Sunkay, going round the year, turn wise. And beginning this year, we have an additional egg in the basket, The Voice of Bhutan and God knows how many more are on the verge of inception.
Does this mean one thing? That Bhutanese is fill…
Post a Comment
Read more
More posts